While trying to compiling nVidia CUDA kernels on my Windows 7 x64 I realized that somehow I didn’t install the Visual Studio 2008 C++ x64 compilers and tools. 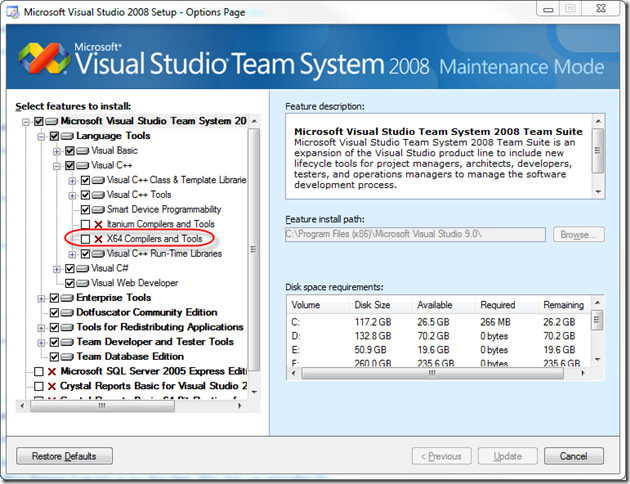 So I tried updating Visual Studio by going to Control Panel/Programs And Features bla bla only to get this error dialog showing up:

Huh? I did have the ISO image mounted. Once more Google found Mike Eshva’s solution to the problem: uninstall SP1, add feature and reapply SP1. I am sure I’ve read this solution before but I never needed it. Later on I’ve found a bug report on Microsoft Connect with exact same motivation, the problem and the workaround as well.

The funny thing is that it didn’t work exactly like that for me. I’ve uninstalled SP1 and then I couldn’t get into uninstall/change dialog anymore. Ooops. But I wasn’t too worried because right before the process I’ve made a backup to my trusty Windows Home Server. Just in case. I didn’t need it though. Anyway I’ve reapplied SP1 and then it started working as it should – I was able to add the x64 feature just as it should be. Except for one additional obstacle during add process:

Argh. This one I’ve solved with help from this blog post.

I guess one or more of the updates/hotfixes after SP1 was causing the original problem (and was uninstalled with SP1), which one I’ll never know.

One reply on “Adding features to Visual Studio 2008 SP1”