So I finally bought an Acer T230H multitouch enabled monitor that is supported by Windows 7. Actually, it is a dual touch but that’s enough. (for more on multitouch input devices for Windows 7 see my previous article).

On the good side it is a decent 1900×1080 monitor, not too expensive and multitouch works even under VMWare Workstation 7. On the bad side I knew it has some problems following fingers. Actually sometimes it gets just confused. That’s not a problem for a project I am working on but nevertheless I was curious.

Hence I created my first multitouch application that visualizes touch positions from monitor. Here is a screenshot featuring two fingers: 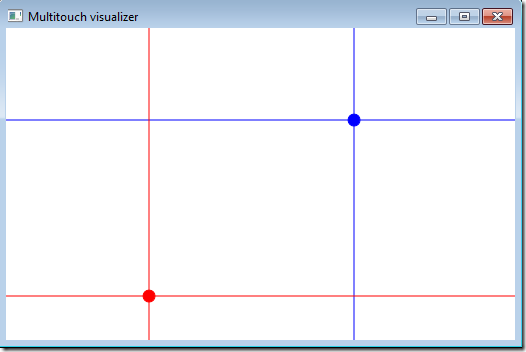 The application itself supports two different colors because I was interested only in two (no problem adding more if somebody wants me to). So, try the application and see how good or bad does your multitouch input device. Note, .net framework 4.0 RC is required.

As per my Acer T230H: indeed it has problems that usually manifest when fingers are nearby. And sometimes it just gets confused. Heck, it is one of the first multitouch monitors and a cheap one.

I’ll be developing a multitouch application in WPF 4.0 running on Windows 7 and using Windows 7 native multitouch (supported in WPF 4.0) running in portrait mode. Dual finger touch should be enough. I have all the tools handy except for one: a multitouch input device aka multitouch monitor. So I am looking around for it and have found these options so far:

Last year I’ve bought a Bamboo Fun pen & touch tablet from Wacom. It supports both stylus and two finger touch input. I’ve assumed it will work natively with Windows 7. But it doesn’t. The core problem is that Bamboo has a relative touch positioning while Windows 7 requires absolute positioning – in other words Bamboo doesn’t know where your fingers are until you touch its surface. Furthermore Wacom decided to provide support through a generic driver to other OS beside Windows 7 and thus no Windows 7 native support is provided at this point in time. Disappointing.

The most logical choice would be a multitouch enabled monitor. Heck, Windows 7 has been around for a while now (including beta and RC period) and there should be plenty of such monitors. At least that’s why I thought. Wrong again. There are some choices though. All of these supports Windows 7 native multitouch.

A 23” 1920×1080 widescreen monitor from Acer. It supports dual touch through a some sort of simple mechanism using cameras. Has problems when you cross fingers or something like that. Not a huge problem in my case. But it has no pivot feature. I guess I’ll just put in horizontal portrait position on my desk or somewhere near. Despite these shortcomings this is my first choice at this point. The price tag is around 300€.

This one is interesting. A 19” 1440×900 monitor with support for up to 10 finger multi touch input. Looks like a perfect choice if it wasn’t for its price which is listed as $1.499 in US. I assume this is translated to >1.499€ for the EU. Ouch. Yet, this is the only multi-touch display that supports more than two fingers input.

As an alternative to a proper monitor I might consider a tabled PC such as Dell Latitude XT2 or Acer AS5738PG-6306. First one is expensive and not exactly a development-grade fast machine, yet is a good quality product. The later is much cheaper and perhaps faster but has one fatal flaw in my case: the screen doesn’t rotate to “tablet” position and as such it won’t work in portrait mode. Furthermore touching the screen looks kind of problematic since you can easily flip it (imagine touching a standard laptop). Both laptops feature an integrated graphic card which isn’t good either.

A tablet PC is not the best option for my project anyway so I didn’t investigate much in this direction. The same goes for All-in-one multitouch PCs.

Heh, I might even built a table like MS Surface by myself. Impossible? Not at all nor it is expensive. Actually it is very cheap. On the negative side it is quite time consuming, even more if you aren’t used to build such things.

There is way to simulate multitouch with multiple mice on normal monitor as well. Unfortunately it is not a feature of the OS but rather through a project hosted at CodePlex. Note that project has a Vista name in it, yet it runs under Windows 7 only – both x64 and x86. The idea is to trick OS to believe that mouse pointers are in reality fingers. This is done through a custom driver and a couple of services. I’ve tried to make it work with a single mouse to simulate panning and it worked on IE but not in my WPF 4.0 application for some reason. It was really a quick test and I should investigate why it isn’t working for my application further. But if I make it work this will be my way of doing multi touch until I get a proper multi touch monitor, possibly Acer T230H.

Obviously multitouch development requires either a very expensive full featured or a cheaper, but simplified and feature lacking hardware. If you don’t want to spend any money at all then you have to check the MultitouchVista project. If you are looking for a cheap dual touch monitor then Acer T230H sounds like a good choice.

Note that the hardware characteristics in this post aren’t based on real experience but rather on the data collected from internet.

If you have a different, or a better solution, or some real experience, please let me know.

A while ago I had the problem with Vista. The thing was that it woke up randomly from the sleep state. The same problem reappeared when I’ve upgraded to Windows 7 x64. But the solution I’ve found previously didn’t work anymore. Even turning off all wake up features for each device didn’t make any difference. Computer would just wake up in the middle of night and stay awake. Besides unpleasant noise there is also unnecessary power consumption.

However it looks like I’ve found the solution once again and this time it is a much more clean and an obvious one. Go to Control Panel, Power Options and click on Change plan settings of the currently selected plan. 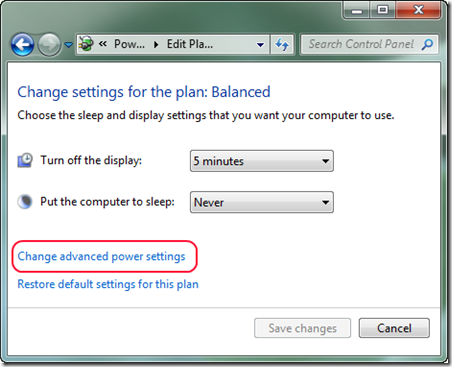 That’s it. Your Windows 7 computer will sleep like a baby again.

I’ve tried to run Windows Live Writer under Windows 7 beta today. It runs but it can’t upload pictures through FTP. There are two indications of the problem:

The remote server could not be contacted to verify the settings. Do you want to continue anyway?

(Publishing Error) A publishing error occurred: The source of the error is unknown.

I wonder whether this bug is related to x64, Windows 7 beta or to both.