Here is an useful CodeRush editor template if you work with Mono For Android.

I use string fv as trigger. That makes binding variables/fields to Views a bit faster and with less typing.

So instead of typing the whole enchillada I had to type only the letters in yellow.

With Android these statements are quite common and thus the fv template spares me a lot of typing.

But hey it can get better. If stick to a naming convetion that variable name is the same as Id name + View suffix I can enhance the template, I will name it fvx.

Note the «Link» directive that copies the typed text. And the typing result is

Even better now, eh. The only further improvement is to deduce the variable type and type in TextView automatically. I have to investigate this option to refine the template even further.

I have to say that I really liked this year’s Bleeding Edge event. It happens rarely that all the pieces fit together: weather was excellent, location was beautiful, I enjoyed my trip (part by train, part by bicycle), attendees were just great and my presentation was a nice interactive (with attendees) one – just as I like. I gave a ton of swag and shown how to enhance your development experience with extending/using CodeRush DXCore, PostSharp or just by using CSharpCompiler.

Hopefully the attendees did like the presentation as well.

Download the few slides below and see you at the next Bleeding Edge!

Microsoft is working on compiler as a service codenamed Roslyn for Visual Studio 11 which is supposed to come sometime next year, I assume towards the end of the 2012. Not much is known and Roslyn might be less feature rich as one might expect. Microsoft announced at Build conference that they’ll release some Roslyn CTP bits in a few weeks time.

The good news is that you can already use compiler as a service today through tools such as CodeRush(commercial)/CodeRush Xpress(free), PostSharp(commerical) and custom coding. Even if some tools are commercial, they provide a tremendous value.

Anyway, after a sabbatical year, I’ll talk again at the Bleeding Edge. In fact I’ll be talking about how to leverage these tools and use compiler as a service for improving both design time coding and your applications in general.

But most importantly, I’ll be giving a lot of swag away 🙂

See you at Bleeding Edge – do stop by and say hi.

Due to the DXCore/CodeRush internal reorganization I’ve had to update my Go To Implementator plugin as well. Nothing changed except that the new version (1.0.6) now works with DXCore/CodeRush 10.2.* and higher. Furthermore I’ve moved the original blog post about this plugin to a dedicated page. All new info will appear on the new page and not on blog post anymore.

One of the biggest annoyance when doing unit-test-friendly projects is that you have to deal with interfaces much more than you usually would. This isn’t bad by itself but it will effectively kill your F12 aka “Go To Definition”. In other words F12 won’t show you the code anymore but rather the interface definition of the method or property. Which is not what I like and I guess not what you like as well. 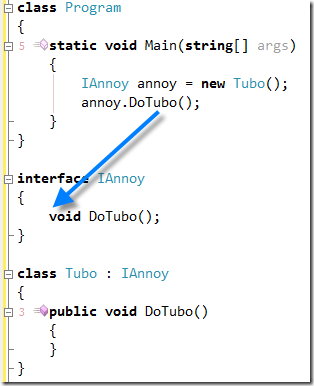 When you F12 (or right click, Go To Definition) on DoTubo() you’ll get catapulted to the interface declaration of the method. Which might be what you want but mostly it isn’t. I’d like to see  the Tubo.DoTubo() method declaration where the code I am interested is. Specially because often an interface is really implemented just by one class, at least in design time. 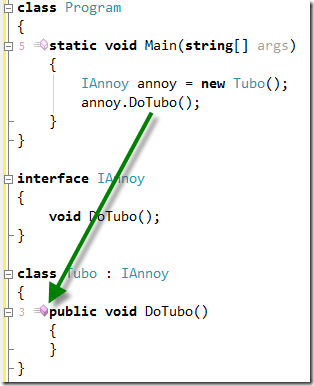 This is what I’d like to see. And this is what you’d get if you weren’t using IAnnoy interface but rather Tubo type directly.

Good news is that now there is a way to use the go to method implementation. Even better news is that it is free. As a free lunch.

I’ve created a DXCore plugin named “Go To Implementator” that does exactly that. When over a interface’s method or property reference it will give you an option to go directly to (one of the) implementation. Sounds fine?

1. If you don’t have CodeRush already installed then do install its Express version which is free or even better, go with full version (which is not free but it is well worth it).

4. Create a new shortcut: click on the first icon under Shortcuts title. Click on Key 1 text box on the left and press F12 (you are telling which key to respond to). Pick “Go to interface implementation” command from Commands combo box. The last step is to click on checkbox Focus/Documents/Source/Code Editor on the usage tree list on right side – a green checkmark should appear. Note that you can bind this action (or any other) to a different shortcut or even a mouse shortcut or any other way supported by CodeRush. 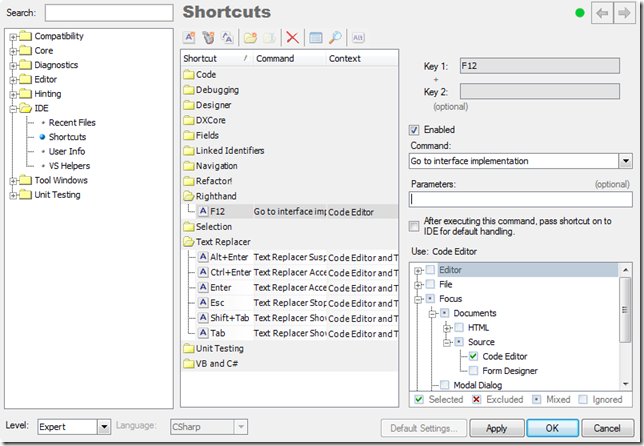 Take also note that there is a “Parameters” text box. I’ll use it pass parameters to my action later on in the article.

Create a console application and past in there this code:

Position the caret on DoTubo() method reference. There are two ways to invoke my plugin.

Right click, there should be an submenu “Go To Implementator” in context menu: 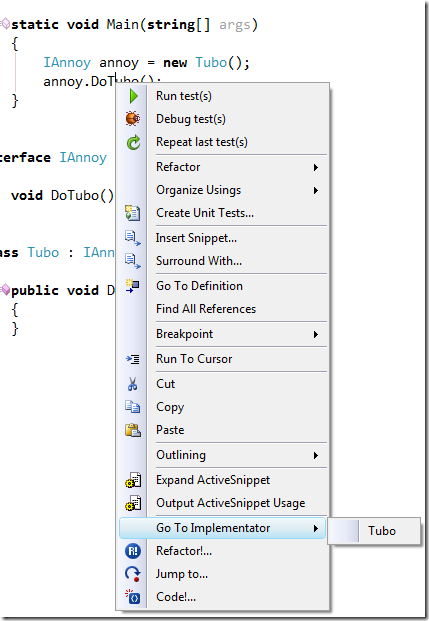 Just press F12. But what if you are not on a interface method/property reference? The default “Go To Definition” will be called like it would be without this plugin.

Dealing with more than one interface implementation

So far there was only one interface implementation. But what happens if there are two or more classes that implement the interface?

Let’s add another implementation to the crowd:

Now both Tubo and AnotherTubo implement the IAnnoy interface. Right click context menu should give both options in no particular sort order, like this:

Let’s pick AnotherTubo class. Plugin will remember this choice and next time it will be placed on the top:

If there is no default class assigned then it should present you a smart tag with options: 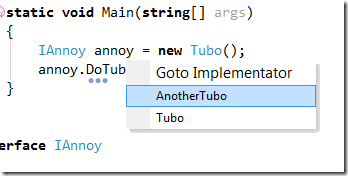 However, if a default is available it would go straight to the implementation rather then presenting this smart tag.

Popup menu behavior is fixed and can’t be customized in current version. The action, one that you can bind to a keyboard shortcut or whatever else input CodeRush is supporting can be customized. There are two parameters (parameters are a comma delimited string that you pass to Parameters text box when you are creating/editing shortcut in DevExpress/Options… – see the 4. step in installation) you might use.

You can disable invoking Go To Definition when action doesn’t do anything. The default behavior is to pass through when action does nothing. So why would you need this option? In case you are using the action from non F12 shortcut or if you want the action to do its job and nothing else.

When there is a default class for action available no smart tag is shown by default. You can override this behavior by passing ShowPopupAlways parameter. Then smart tags menu will be shown always when there is more than one class suitable regardless the default value is present or not.

Here is an example of passing both parameters: 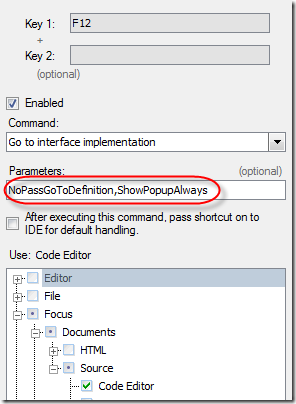 I hope you’ll find this plugin useful. I am starting to use it and it saves me a lot of clicking. And thanks to DXCore it was really easy to create it.

Let me know if you have ideas how to enhance it or anything else, all feedback is welcome.

Bug fix: it worked only within project scope.

Too strict parsing used which might resulted in no go to implementor option at all.

Added some logging – make sure DevExpress/Options…/Diagnostics/Message Logs is turned on (if you are turning it on then you have to restart IDE).
No new functionallity besides logging – you might consider this version if plugin doesn’t work well and you want to understand why.

Important: this is the last version supporting DXCore/CodeRush 10.1.x and lower.

Even more important: I’ve created a dedicated page and all further improvements will be published throug that page. This post won’t be updated anymore.

First new “feature” is stepping down from three releases per year to two releases per year. Regardless how it sounds, it makes sense. A lot of sense. Developers and other staff spent a lot of time preparing releases and I don’t mean implementing new features but just preparing and testing the releases. From now one they will have more time for coding new features. As per DevEx clients this is good news as well – having to do major updates less time per year provides similar benefits. Bottom line is that we have more features, less work and possibly less bugs.

From the technologies perspective it looks like WPF and Silverlight are getting mainstream while WinForms is dropping down from first place (that said it isn’t a dead product, far from it, it is just not the most important anymore – I am very pleased to see this shift happening). ASP.NET MVC will get some beta versions (“we shall be testing the waters with beta versions of the data grid, menu, navigation bar, and tab control”) while ASP.NET is still the most important of the two.

Visual Studio 2010 is going to be supported big time including CodeRush for VS2010.

These are news in brief from what I can read. But don’t take my word for granted, read it yourself at http://www.devexpress.com/Home/Announces/roadmap-2010.xml.

Yesterday I held a presentation (as the part of Bleeding Edge 2009 conference) on how to make ASP.NET MVC applications strong typed by using CodeSmith and CodeRush (actually by using its free DXCore part). Attendees were great and the presentation went well. Attached are the slides in Slovene and source code in C#.

Thanks everybody for attending the presentation.

Will it work? Of course not because you are removing items while your are looping the entire list. That means sooner or later you’ll bump against out of index exception or items silently won’t be removed. And this is a common mistake we all do I suppose.

The solution is a pretty easy one – reverse the for loop, like this:

However I find writing reverse loops harder than the former one. Not sure why but I guess that’s how I am used to do the maths – addition is always easier compared to subtraction.

Luckily there is CodeRush to the rescue. Just execute the Reverse For Loop code reformatting (not refactoring because you do change the meaning of the code with this one) and you are done. 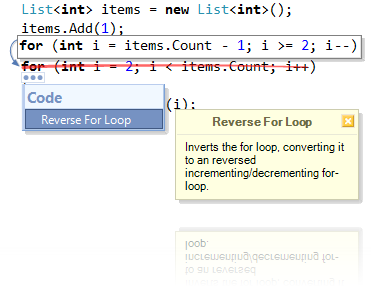 It works the other direction as well. Until today I didn’t even know that this trick exists. I just assumed it does and it sure did exist. This and a “million” of other features makes CodeRush really a must have coding tool.

with these
where model argument is strong typed of course. There are other overloads as well.

For more details read my previous article Strong typing views in ASP.NET MVC. The new template is attached below.